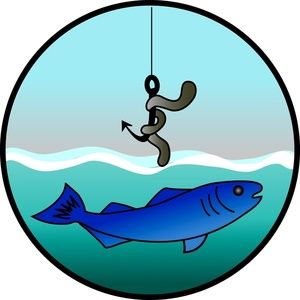 Worms are the novice answer to fishing in any circumstances, and in fact there are really no fish that won???t bite on worms at all. In today???s high tech angling world, though, worms are often left far behind, and those using fishing worms for salmon should probably get used to little action from the fish and a lot of behind the back action from fellow anglers.

If you have a cruel bent mind, go out into your garden and dig up a worm, lay it on the sidewalk, and pour some salt on it. The results are drastic; worms just can???t survive this corrosive material as their skins are far too permeable. You now have an idea of why fishing with worms for salmon is not too effective; worms cannot survive in the ocean, and therefore are not recognized by salmon as piece of food. With that said, there is also no guarantee that a spawning salmon in a river won???t strike at a worm tipped rig, but this is more a matter of luck than any particular desire for a meal on the part of the salmon.

There are some circumstances where fishing worms for salmon is a moderately effective strategy. The first, as mentioned above, is when the salmon aren???t really biting on anything else so you dig around for what is occurring naturally. The second circumstance is when you are out after kokanee in their still water, lake environments.

Kokanee don???t include worms or other animals as part of their main diet, contrary to popular opinion. Kokanee actually live off of zooplankton that they rake through their gills. Doubtless many of you reading this and your angling partners will scoff, but next time you are out after kokanee cut a few open and see what is in their stomachs. There won???t be any small fish, and certainly no earthworms.

Just because kokanee won???t take worms naturally, though, does not mean that they never take them. Worms are around the fourth most effective bait there are for catching kokes, after maggots, corn, and salmon eggs (power baits like pieces of marshmallow and shrimp can also be used). These worms are most likely to be struck at in spring and early summer, but as the days get hotter kokes are less likely to strike on a worm rig.

A third circumstance where worms have proven effective baits are for steelhead in rivers and streams that are already full of anglers. In this case, the steelhead may have some kind of recollection of worms as a source of food when it was younger, and the appearance will be different from that of the plugs and bucktails that all the other anglers are using. If you???re lucky, you might get a bite.

Worms remain popular for all types of fishing mainly because they are free. They are very productive when it comes to fishing for species like trout, so if you are out angling for kokanee in an area where trout are present, be aware that using worms will attract more of these rough fish than the soft species you are after.

Despite their relative ineffectiveness, fishing worms for salmon still remain popular for all types of fresh water salmon angling. Don???t expect a lot of success if you go for this bait though, unless you are pursuing kokanee in the early fishing months.