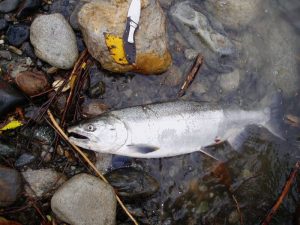 There are still some places left on Earth where you won’t be able to help but catch a salmon no matter what you’re using for bait, particularly if you are lucky enough to catch the Coho (silver) run in certain parts of Southeast Alaska.

In areas such as the waters off of Whale Pass on the northern tip of Prince of Wales Island, for instance, the waters are sometimes so thick with silver salmon that you can quickly catch your limit whether you are jigging for salmon or using roe for bait. Some years are better than others, though, and silvers aren’t always as thick as described above.

Silver salmon make healthy, delicious meals, but many salmon fishermen are after the larger and most elusive (Chinook) King salmon run. These begin running in May on the Pacific coast, and the record weight for a sports caught Alaskan King salmon is 97 pounds. However, their normal weight generally averages between 25-35 pounds. Jigging for salmon is a popular and effective way to catch this particular type of fish.

What jigging basically means is that you use a weighted lure and raise it up and down again. It’s important to keep it moving because the movement is what attracts the salmon in the first place — it will think that the lure is another fish that is swimming. Please take note that this method will generally be unsuccessful if you are trying to catch the prized red or sockeye salmon. One little-known fact about red salmon is that they are primarily vegetarian creatures.

However, if the water is not fairly calm, you may need to use a heavier lure to ensure that you can jig vertically, and heavier lures are also called for if your fishing grounds are in deep water. Using a low-stretch fishing line is also recommended because using it will enable you to more easily move your line up and down. Because there is no real “one size fits all” jig, salmon fishermen should carry several shapes and sizes.

It’s also important when using this method to catch salmon that you use very sharp hooks. Salmon can frequently shake a dull hook within a matter of seconds. Many fishermen also report success using scented lures.

Jigging for salmon takes practice and patience, but it ultimately pays off because jigs work. Because they are approximately the same size and shape of the herring that Pacific salmon such as Kings and silvers typically feed on, many salmon fishermen in the Pacific are using them in place of traditional herring. They’re less expensive than buying packs of herring for bait as well as less messy and smelly, and they work just as well.