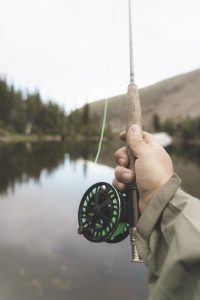 The exception to the spawning rule are kokanee, a land locked variety of sockeye that are renowned among fresh water anglers for the incredible fight they put up when hooked. Even kokanee, though, are very unlikely to bite on a fly while lake fishing, even though they are found in these bodies of water year round. The reason for this is that kokanee, like steelhead and other salmon, are predatory species that prefer either smaller fish or small shrimp in their diet rather than insects.

Now with that out of the way, don???t be totally discouraged by the idea of casting for salmons on lakes, just be ready for a long day with limited success outside of the joy of fishing. To have any chance at all, you will need to have an idea of where to go and cast.

With salmon and steelhead on the spawn, and kokanee as well, the best place to cast on a lake is at the mouth of a river. These fish are headed to their hatching grounds, and accumulate in huge numbers in the areas of lakes where they meet the next river system.

Your odds of catching one are a lot better here; just as with people, the more fish there are the better odds that at least one is in the mood to bite. Here are some lake fly patterns for salmon and steelhead fishing that have been proven to work in the right locations.

Wet Flies: Small chartreuse and fluorescent orange flies have attracted kokanee in bays where they are conglomerating for the trip up a spawning channel. Streamers have also worked; kokanee are used to feeding in fresh water so they are more likely than other salmon species to take a fly. Again, though, this is rare, but once one takes get ready for a big fight!

Prawns and shrimp: These flies break the rule that applies generally to salmon fly fishing, namely that the fly patterns do not represent anything in particular. As you can tell by the name, prawn and shrimp flies do represent something, one of the salmon???s preferred food when it is in the ocean.

Personal opinion leads me to believe that the salmon???s ocean memories are what trigger it to bite on these flies, but whatever the reason patterns such as the General Practitioner, Shrimp fly, and Icelandic Krabla fly have proven successful.

Any time you are fly fishing for salmon, you are in for a bit of a slow day, and in lake casting this is more true than ever. Finding an area where the fish are gathering before they head upstream, and using proven lake fly patterns for salmon and steelhead fishing, will greatly increase your chances of success.