Pink salmon (Oncorhynchus gorbuscha), is referred to by anglers as humback salmon, pinks or humpies. They migrate up rivers during their spawning cylcle although in different cycles than their other Pacific Ocean cousins.

Pinks are the most populous of all the salmon species, Atlantic, Pacific, or freshwater. They are a Pacific species which is anadromous, which means that they hatch in fresh water and then migrate to the ocean, and return to fresh water to spawn. Like other Pacific varieties, pinks will usually return to the same stream or river where they hatched when they breed. They will also die after they have spawned.

Pink salmon are also known as humpbacked salmon, due to the bulge that appears on a male’s back during spawning time. Like other salmon, pinks will also change color during a run, from ocean silver to yellow and grey on the run. Their jaws will hook while spawning, the top and bottom for males and the bottom only for females. They are the smallest of the salmon species, only getting to be about thirty inches long and weighing five to six pounds on average.

Because of their small size, pinks were not especially desired either commercially or by sport anglers until the depression years. The lack of food and the plummeting numbers of other species during these years increased the pressure on these fish, and they have been considered a worthy species ever since. In fact, pinks are now the most sought after fish in the commercial industry, especially in places like Alaska.

Because of their lower tolerance for warm water, pinks have a more restricted range than other salmon. They thrive in water that is around 10 degrees Celsius. Thus, their southernmost range is less than other salmon. In the eastern Pacific, they can be found from the Sacramento River in California to Alaska.

The smaller size of the pinks is perhaps behind their lower temperature tolerances; unlike other salmon they also cannot tolerate frigid arctic waters. Thus, their northern range in the western Pacific is limited to the Lena in Russia and parts of northern Korea. They can also be found south to Hondo Island in Japan.

The life cycle of the pinks is also shorter than that of other salmon. Pinks will usually mature in only about two years, at which time they undergo the trip upstream. This trip is shorter on average than other species. Some pinks actually spawn in inter tidal areas; most will travel about 64 kilometers upstream before laying or fertilizing and then dying. Some pinks will travel much further, though, in large rivers migrating almost 500 kilometers.

Pinks will have a varied diet throughout their lifetime. While younger and in the ocean, they feed mainly on krill and small crustaceans. As they grow, other fish and shrimp will be added, and eventually pinks will also dine on insects, larvae of mussels, and barnacles. Like most other salmon, pinks do not eat much during the spawning season, but casting on flies it is still possible to hook a pink.

Below you can see the bottom jaw of the Pink salmon. 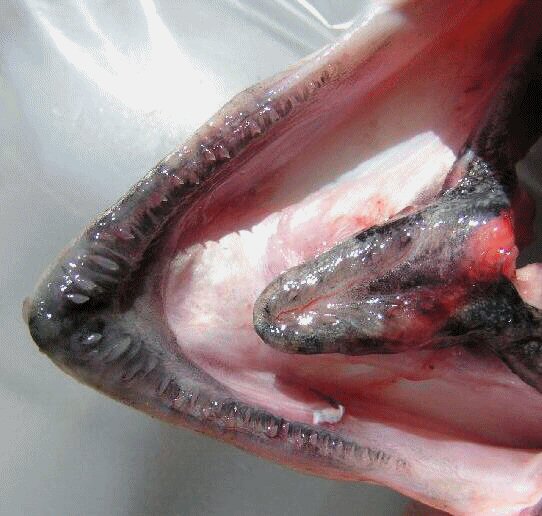 Below, you can see the distinct spots on the “humpies” tale.

Check out the “hump” on this guy! A great full shot of a Pink Salmon.

If you would like to learn more about each species such as Cherry Salmon, click on the hypertext or go to the top of the page to find out more about the species you’re interested in.