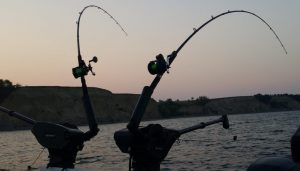 Back In the days of successful commercial Atlantic Salmon fisheries and abundant Pacific Salmon fishing boats, trolling for salmon was easy and common for most recreational and allot of commercial anglers to practice until numbers of salmon dropped and environmental warnings sounded.?? The technique is still used for most guided or chartered fishing excursions, although its use is less productive as it once was in the mid to early 1980???s.

Trolling is a successful approach to salmon fishing, especially in saltwater because of the water that is covered in a day.?? It???s the amount of ocean covered in the early season, where numbers of salmon are minimal, that trolling becomes even more effective as schools of salmon that are found ???crashing??? bait-balls of herring are harder to find until later on in the summer months. 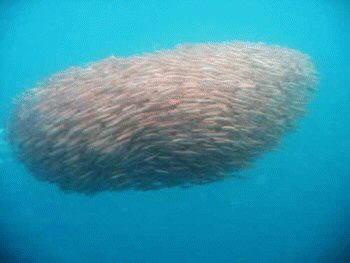 Trolling, which can be often confused with another similar technique called mooching, can be a more expensive way of catching salmon as the setup is more complex, using expensive plugs, heavier reels and more robust rods which results in higher costs.

Trolling also uses weight tackle called a sinker release, that is completely free and forever detached from your setup once the fish is hooked, making it even more expensive and not to mention the fact that it???s not the most environmentally friendly way of catching fish.

If you???ve ever been fishing with Grandpa or Grandma when you were starting out, then you remember how frustrating it was out on that cold lake in the morning when grandpa just couldn???t stop fiddling with the speed of the motor and ended up getting you caught up in a log jam too close to shore!?? Well you also probably remember that when he hit the perfect speed it was always fish on!?? Same goes for trolling for salmon on the ocean.?? It???s incredibly hard to get the right trolling speed when you have to fight currents, wind, swells etc., but if done properly it can result in a huge pay load of fish.

Trolling speeds control depth, keeping you???re lure where the salmon are holding, and also helps trigger the fish???s predator instincts on a simulated bait or ???wounded herring,????? that is flopping around at just the right speed.?? An experienced guide knows that a great speed for trolling is most commonly found between 2 to 4 knots per hour and delivers the best simulation.

When trolling, Go Salmon Fishing.com urges the importance of keeping all of you???re tackle consistent when it comes to what rods, reels and setups you???re using.?? Different reels and rods can effect what depth your lure is getting to and results in tangled lines or lost fish, if you???re using more than one setup.?? Try and buy more than one of the exact same (or very close to), reel and rod setup and lure setup, that way you can easily adjust the weight or speed to alter the depth of all your lines without worrying.

Trolling plugs is a very popular way to catch salmon.?? If you want to try something new, try dragging plugs behind your boat that are all the same and see if a new plug is going to work for you or if you need to switch it up and put on ol??? faithful.?? It???s also a great way to see if a certain plug is going to perform better at a certain depth.?? Hey nothing ventured nothing gained right?

Although many things change when it comes to trolling like tackle bait and speed, one thing remains the same and that???s depth.?? You always need to get your bait down there in the water to where the fish are and speed controlling the speed can be time consuming and inefficient, so anglers have started to use weight.?? Having a weight attached to the end of your line while fishing in saltwater is called downrigging and has made the efforts of depth fishing so much easier.?? To find out more about Click Here

Trolling saltwater spoons in the ocean environment has also been just as effective as a trip to the Vedder River in British Columbia and using freshwater spoons for Steelhead or Coho has been!?? Fish like Coho and Springs that are used to chasing crippled herring in and out of rising and falling tides, are naturally attracted to spoons that resemble what makes up most of their natural diet and is an extremely effective way to fish salmon while trolling.

In the ever changing sport of fishing there are only a couple things that remain constant while trolling for salmon and one of them is fun! ??So have fun out there and if you do allot of saltwater trolling, don???t forget the gravol! In the mean time check out our article and suggested tackle in our trolling freshwater spoons section!