Attractants That Work For Salmon 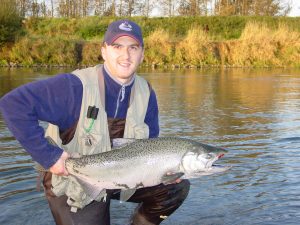 Fishing is a scientific sport that has become more and more honed over the years, as people gain a greater understanding of fish biology and their predatory responses.

There have always been fish attractants for salmon that work well, but recently these effective tools have spread to several different areas when it comes to the sensory abilities of the salmon. Let???s look at some of the different attractants and how they play on a salmons??? senses.

Salmon have highly developed senses of smell, so one sure fire way to get some salmon in the area is to use an attractant that disperses throughout the water you are fishing. These attractants are both artificial and natural, although one has to be careful with which natural attractant is used as some types are illegal in certain areas.

One example of an effective attractant that is not legal everywhere is corn. Corn is especially useful when fishing for kokanee, the land locked version of sockeye, and will also work in rivers where salmon are spawning. No one knows for sure why salmon species will strike on corn (or anything else really, especially when the fish are spawning) but certain types of corn certainly have highly attractive scent qualities. White corn in particular seems to work the best of all the varieties.

Artificial fish attractants for salmon are legal in most areas, much more so than natural scent attractants. These attractants are generally included in packages of fish eggs designed to imitate roe. They give off a good scent in the water that attracts the salmon and causes them to bite on the tiny foam bubble. One of the best things about these set ups is that you can put the eggs back in the container after a little while and they will regain their scent.

One of the most well known pieces of attracting equipment for salmon are visual attractors. These are perfect when trolling, as the natural movement of the boat will cause these visual attractants to spin and roll, catching light and sending it off in rays, causing fish to take a look. These visual attractors include flashers and dodgers, and are also a key component in the success of spoons and blades. While spoons and blades may be used either as lures or in groups to simulate a distant school of baitfish, flashers and dodgers are put before the lures purely to get the attention of far off salmon.

One of the most amazing variety of attractants are those which manipulate the electrical current around them, causing fish to be drawn to the changed currency. Buzz bombers are typically thought of as audio attractants, but in fact what they are doing is manipulating the electrical currencies of the immediate and surrounding area. You can test this out by finding a wharf where there is clear water and dropping the buzzer up and down; you will notice the fish all around take an immediate interest and start to come closer.

Fish attractants for salmon are designed to get the fish interested in what is going on around the vicinity of your bait or lure. Natural attractants such as eggs and roe for salmon fishing or fresh herring remain the most successful attractants, but other types discussed above are known to work as well.