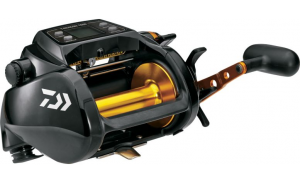 Trolling is the most successful method of salmon fishing, bar none. Trolling allows an angler to cover a lot of water during a day of fishing, looking for the spots where the salmon are hanging out. A huge part of the success of the day when trolling is the type of trolling reels for salmon fishing that are used.

All trolling reels are specialized pieces of equipment, and those used for salmon fishing, whether in deep rivers after kokanee and spawners or out on the ocean after maturing chinook, sockeye, steelhead, coho, chum, or pinks, need to have the necessary heft and capacity to land your fish.

Check out our selection of trolling reels – Click Here

The rule of the day when you are out trolling for salmon is depth. Species, time of year, temperature, and food sources will all determine how deep the salmon you are after are swimming that day.

A lot of anglers will use radar devices to detect schools of salmon swimming under the water, but for years anglers have relied on the amount of line they pay out for a bite as the true and accurate measure of how far down the fish are. Level wind reels have been the obvious choice when it comes to both ocean and river fishing; the smooth action they provide allows for both better line control and an easy count as the line is stripped.

The most common style of trolling reels for salmon fishing are also the most successful; single action reels provide an angler with the control needed against the drag of the boat without negating the excitement of the fight when a fish is hooked. Single action reels often have a drag system, as they are heavier versions of freshwater casting reels, but these are often not needed.

The best way to take some of the fight out of the fish is by placing your own palm against the drum as the fish is taking out line; this action, along with that of the boat, produces sufficient drag. Because of the nature of single action reels, you are always either giving line to the fish or taking it from the fish; there is no guess work involved in just how far out the fish has gone. The feel of the reel on your palm also gives a much better sense of a one on one fight that an open face casting reel would.

As you might have guessed from the paragraph above, open face casting reels can also be used when trolling for fish. For the most part, these reels will be used only with the appearance of fish within close proximity. Casting while trolling is difficult and not too successful, since the movement of the boat does not leave a lot of time for play, either in directing the cast or in playing a fish  should you be lucky enough to hook one.

Single action, level wind reels are the best choices when it comes to trolling reels for salmon fishing. They impart the necessary combination of accuracy, fight, and ease of use to the trolling angler and are the easiest to use compared to the more challenging mooching and centerpin reels for salmon fishing. Mooching and centerpin reels are really the most commonly used reel for trolling in saltwater and not to mention the most exciting!