Salmon, as a species, are biologically programmed to seek out cooler waters. Their ocean going adulthood is adapted to surviving in the frigid waters of the Pacific, but during their spawning cycle many species of salmon will return to warmer interior waters. The temperature increasing the further south one goes in salmon habitat. 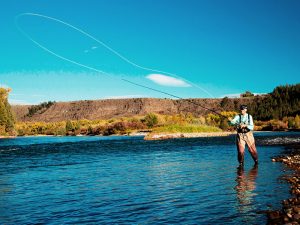 Warmwater fly fishing, however, does not generally include salmon among the species that are sought after; in fact, trout as part of the salmonidae group also count as cold water species.

So when it comes to fly fishing in warm water, we are generally not speaking of fish in this group.

This term can be confusing depending on where you are used to living. As a resident of the southern part of the interior of British Columbia, I would say that warm water occurs from July to early September in most rivers and lakes. When researching the term, however, it is pretty clear that warm water to most anglers refers to waters that can be fished from shore or in a belly boat without numbing the lower body.

Again, this answer will depend on where one lives. According to most of the literature, salmon are ruled out as an official warm water species, and are therefore not included in the lists of pursued species in warmwater fly fishing. Species that are included in this category include big and little sunfish, carp, suckers, pike, pickerel, muskies, and bass.

Now, I think that a point can be stretched just a little, and that in some cases salmon species can be included in warmwater species varieties. Not many people would argue that the Thompson or perhaps even parts of the Fraser in British Columbia, let alone shallower parts of the Klamath in California, are cold in August.

This is the time when big runs of sockeye and chinook are making their way back to spawning grounds. So in these cases, salmon might be classified as warm water fish, although not a permanent resident.

The great thing about fly fishing in warm water, for whatever species, is that you have the opportunity to be immersed in the water for hours without insulating clothing and without risk of hypothermia. You can cast from shore in shorts, or you can inflate a belly boat and float around for hours. You can check out our warm water flies here.

Don’t expect to catch salmon on a fly cast from a belly boat, however. Smaller lakes are unlikely to have salmon swimming around everywhere. They are likely grouped around the mouths of the next river or creek leading to their destination. You can toss to theses big groups from a boat, but the results are just as likely from the shore.

Salmon won’t generally be included among the species that can be caught warmwater fly fishing, but it is my opinion that this is only as a result of the fact that they do not inhabit this type of water year round.

It is entirely possible to catch salmon using the same strategies employed for types of “true” warm water species, but more patience will probably be needed as they are not guaranteed to rise to a specific fly.