Over the years I’ve read a number of books and magazines that helped me learn and by practicing them on the freshwater tributaries of BC, I was able to then pass the “know-how” onto friends and family members who would join me for a day on the river during the great migration of Springs during spawning periods. I’d love to pass what I’ve learned onto my readers so I’ll give it my best shot! 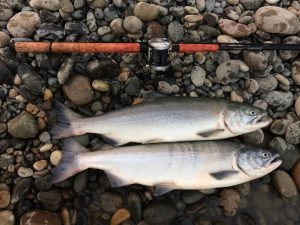 Both ways are fished from a boat facing upstream and running the boats motor enough to slowly move downstream with the current, rather than just drifting as fast as the current can take you – which can be way too fast. Tackle is setup with weights and swivels, and is then trolled off the back of the boat. The current moves faster than the boat allowing your bait or lure to easily get to the bottom where Chinook are most likely to hold.

It’s good to know that both backtrolling and backbouncing methods of trolling use virtually the same gear setups with maybe different lures, prawns or terminal tackle, but the basic setup is almost identical.

This procedure of catching productively has been widely used in the United States and almost completely ignored in Canada for no real reason other than comfort or experience! Rivers such as the Columbia and Willamette are water systems that most anglers take advantage of these two methods because of success using them, where British Columbians are more commonly seen bottom bouncing which is a slightly different way to fish water that we cover in another technique article.

First lets have a look at what backbouncing is really about.

The best weight for this specific approach is a tungsten steel cannon ball style weight. This material is more dense than the environmentally “unfriendly” lead weights or bouncing betty’s and actually performs better with longer life than lead anyway – it also has a better feel than lead because of it’s rigidity or density.

Pencil lead, which is another name for tube weight, is also very effective in calmer waters or smaller bodies of water that branch off from the main water vessel. It’s tubular design is cuttable and for your mainline to slide through, although some have a swivel or attachment on the top of the weight to hook up to your line.

The main idea is to have your weight bounce along the bottom of the river having your lure or roe (or whatever you’re using) not far behind at the bottom as well. When a Spring salmon sees the presentation infront of them, they either bite or attack in territorial defence. The main idea behind back trolling is to not be smashing the bottom but floating your diver just above the surface of the riverbed with your lure following behind creating it’s action that will drive a Chinook to bite. Backtrolling, is almost identical in it’s technique to backbouncing, but changes when it gets to how deep you’ll be fishing your rig.

The best way to remember the difference is that back”bouncing” weights are actually bouncing or touching the river bed and the plugs, lures or bait is right down with it. Backtrolling uses a diver that will be very close to the bottom but not touching with similar weights that are lighter and not going to be skipping across the rocks.

Okay so now that you have the basic idea of what backbouncing and backtrolling are all about, let’s have a look at how and why we rig up these two methods of angling. Both methods use a three way swivel as one way of connecting all of the components together, although in my bottom bouncing section, there are other ways that I suggest that work as well but tri swivels are the easiest. So from your mainline, you’ll have the swivel and from the bottom eye of that tri swivel you’ll attach a diver about 6 inches below – which will help give you your depth. Back up to the swivel now, you’ll have the leader material going to your hook with your bait or lure. It’s important to note that the length of the leader is dependant on the depth of the water and currents and you will need to determine the best length when you get to your spot.

If you are approaching this method from a boat, you need to really keep an eye on your speed much like drifting for steelies. You want to be going down stream slower than the top layer of the current so a slight up river speed will slow you enough to get the right troll speed needed. Luhr Jensen makes a diver that you can use for back trolling called the Jet Diver that you can buy right here – it works great for this method along with a Wordens Flatfish or Luhr Jensen 50/60 Hotshot.

Back bouncing like mentioned above is the same setup but with a ball style weight – such as a boucning betty or pencil lead – from the tri-swivel. The line from the weight to the swivel is usually longer then that used in the trolling system as it helps to stop from snagging your hook on debris laying on the bottom of the river bed. You don’t want your hook dragging along the bottom or you’ll be losing tons of tackle on snags and big rocks.

Back bouncing uses similar skill to the back troll but is a bit more complex. The rig is essentially the same, but lead is substituted for the diver. Once you are set up above the drift, bow upstream, fisherman and rod facing down stream, lower your rig to the bottom. The technique you need to use is this; same speed as the trolling techniques but you will be bouncing along the bottom of the river feeling small taps like morse code. If the taps are too close, then you may need to reel a bit of line in or change your weight to a lighter weight to get a better drift. The same can be said if you don’t feel the bottom as far as weights are concerned. If you don’t feel any tapping, you may have to put more weight on your gear.

So what do I need when back trolling or bouncing?

The best gear to use is a medium action rod that has lots of sensitivity. This rod will be allot different then other rods because you’re not needing to cast a bunch of tackle out into the river, you are wanting to feel the bottom and more importantly, feel the fish! I like to use a baitcasting reel, but spincast reels work too and should have about two hundred yards of 15-20 lb monofilament backing and a good drag system. If you’re going for smaller fish you can move to a lighter system and lighter backing.

Other equipment that is not essential but extremely useful to have are landing nets, extra clothes, sharp knives, needle nose pliers and a file to sharpen hooks.

If you like this article on backbouncing and backtrolling for Kings you might want to try anchor fishing or plunking!