One of the truths about salmon fishing is that there are as many opinions as to the most effective ways to catch these fish as there are anglers themselves. Salmon are a difficult species to pin down when it comes to effective fishing practices because their traits vary so greatly according to species, and also according to whether or not they are in spawning mode. 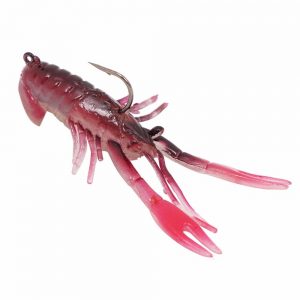 Even the original rivers and streams where a group of salmon hatched may have an affect on how likely they are to take a given bait or lure offered on the end of a rig. What is certain, though, is that there are no effective crayfish and bugs for salmon fishing.

The odd, incredibly patient, and na??ve angler may catch the rare salmon, steelhead, or kokanee on a lure representing a crayfish or a bug or on a real crayfish or bug, but this will only happen under the rarest of circumstances.

We???ll take a look at this circumstance in a little bit, but first let???s explore the reasons why salmon are unlikely to strike at the end of a line baited with crayfish or bugs.

Salmon are a predatory fish that spend most of their lives in the open ocean, where bugs are a rarity and where crayfish are pretty much nonexistent (I hesitate to say never, but I don???t recall hearing of any species of craws that live in a saline environment). Salmon living in the ocean eat either smaller fish (baitfish, usually herring) or in the case of sockeye zooplankton that is raked through their gills. Crayfish and bugs are not even a part of the diet of these baitfish, who grow up on a steady stream of plankton and algae.

Salmon do come into fresh water where both craws and bugs are found in plentiful supply, but when they do so they are rarely interested in eating, as the instinct to spawn has kicked in. When they do rise to a type of bait, it is likely in some form representing what the salmon ate at sea, or else a fly that look unlike anything found naturally, the purpose of which is to irritate the salmon or arouse its curiosity so that it takes a bite.

It is this irritable nature that may mean some anglers are lucky enough to get a strike on craws or bugs, but it really has nothing at all to do with biology beyond a natural protective or inquisitive instinct. Salmon, and this includes steelhead and kokanee, might chomp at a hook baited with this bait but this is by no means a guarantee.

In short, don???t make the mistake of thinking that there are crayfish and bugs for salmon fishing that will help you to be successful. These baits work fine for other fish, but like lobster they are an unfamiliar species to Pacific salmon and only luck will get a salmon to strike at such bait.