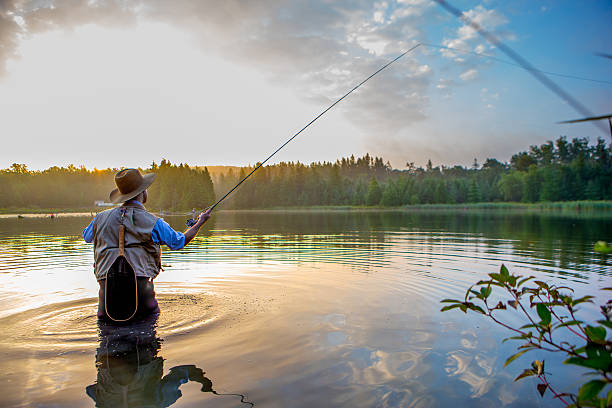 Have you ever caught a Coho or Steelhead on a fly rod?

Well if you are one of the lucky or skilled anglers out there who has, then you can stock up your fly box with these killer flies, or you can keep reading and find out what flies you should look for when you are going to hit the Ocean with your Spey rod, or if it’s Freshwater, with your Centerpin!

Most fishermen go for Salmon with bait, lures or plugs and such, but there is a few anglers – usually more experienced or tired of the same techniques – who switch it up and change their tactics to that of a fly fisherman. In the next few paragraphs we’ll discuss what exactly entails fishing for salmon with flies and what you’ll need.

If it’s salmon that you are targeting, you have to understand a few basic concepts before you go and buy anything. First of all, most salmon don’t actually bite flies! For example; Chinook, otherwise known as King salmon, that are spawning in rivers seldom take bait because they are feeding or hungry. These salmon bite in freshwater rivers because they are very territorial or aggravated by your lure.

Sometimes they are also caught by a technique referred to as “flossing” (which some anglers don’t like because it can be viewed as having no skill or simply snagging the fish in the mouth as the hook drifts down the river). One of the only species of salmon to actually aggressively bite a fly would be Steelhead or Coho Salmon.

Another thing you’ll want to consider is size of hook. Depending on species and water body you will have a few options – the obvious one being size, which depends on how big the fish you are targeting are possibly going to be, and what type of water system you are fishing them in – Saltwater or Freshwater. You will also want a fly that will resemble the insects, fish or other animals that are in the surrounding environment, so it’s convincing to the fish.

One thing that a lot of anglers forget is the weight of their line. The weight of the your line and the size of your hook (which translates to hook weight as well), transversely effects how effective your cast will be. If your hook is heavier than your line or visa versa, you will be “whipping” your fly and can expect allot of tangled leader material or lost flies.

Here is a quick tip: divide the hook size of your fly by “3” and that is a suitable “X” rating to use in tippet selection. As an example, a size 6 hook divided by “3” would equal “2” or 2X tippet. This is a guideline meant to assure adequate presentation and turnover, but don???t live and die by this formula, as a good fisherman ALWAYS improvises and changes.

Steelhead Salmon are very popular to catch on a fly rod because of their size and aggressive nature. Having a major population of fish being caught in coastal river systems or in the interior Great Lakes of Canada and USA, they have been extremely accessible and as a result are on a threatening decline in population due to low cost of fishing for their particular species, as well as popularity.

Steelies are arguably one of the most acrobatic and hardest fighting fish – pound for pound – that there is and being able to pursue them on a fly rod that allows for a more sensitive feel to the rod and a reel action that will give any novice angler a “jammer.” A rule that a lot of “steelheads” have kept in mind is “Bright Day = Bright Fly, Dark Day = Dark Fly.” That’s just one of many rules to follow when choosing the right Steelhead fly.

Most Summer Steelheaders are going for the “summer run” and are fishing low light in the early morning or late evening and dark patterns like the Green Butt Skunk or Freight Train are good because of their brightness. Other popular flies for summer are the Purple Peril, Streetwalker, and the Skykomish Sunrise. You’ll want to choose less vibrantly colored flies for lower, clearer water as to not spook any fish.

As early fall approaches and rivers are getting muddy due to run-off, bold and bright flies like the Marabou fly, is a good choice of bug. If it’s the mighty winter Steelhead you are in pursuit of, try a fly pattern like the Bunny Leeche, Marabou Flie or Egg Sucking Leeche.

These patterns with flash and/or silver added or egg patterns, and patterns with reds, oranges, yellows, and bright purples have proven very successful for “steel-stalkers.” If all else fails, go back to the basic blacks and whites. Steelhead will often nail a black bunny leech, marabou leech, or wooly bugger, when nothing else will work, although they aren’t as picky as other salmon and it’s a lot easier to pick a Steely fly than it is choosing the right coho fly.