If you love the taste of freshly caught salmon and would like to catch your own but think that the only way that you can do so is by going out on the ocean, you should know that you can easily fish for certain varieties of salmon in the streams and rivers that lead to their spawning grounds. 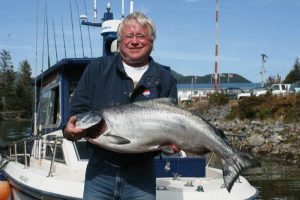 Successfully catching freshwater salmon while using the proper gear will depend on several factors. River and stream salmon in some parts of the Pacific Northwest can be inferior to their ocean caught counterparts because salmon typically begin to get ready to spawn as soon as they leave salt water.

However, not all rivers and streams are created equal. Salmon who spawn in long rivers retain their quality better and for greater amounts of time than those that spawn a short ways upstream from where they enter from the salt water. If you are going to be fishing in the streams and rivers where the salmon spawn in southeast Alaska, keep in mind that the rivers and streams are short in that area.

This doesn’t mean that fish caught in them won’t be any good; it does mean that you’re advised to go gear fishing for salmon as soon as possible after these fish leave salt water. By the same token, salmon that spawn in long rivers such as the Columbia River along the Oregon and Washington border don’t deteriorate as quickly after entering the river.

Catching salmon in rivers and streams requires different gear than what is used for ocean fishing. Freshwater fishing can be done either from the shores of the river or from a boat, although many of the smaller salmon spawning streams aren’t large enough to accommodate watercraft. Shore anglers generally have good luck in these streams.

There are five different type of Pacific salmon, and not all of them can be caught in rivers and streams. The most commonly fished for type is Coho (silver) salmon. Firm fleshed and mild flavored, this salmon species is excellent eating and is fairly easy to catch during the late summer or early fall when great schools of them begin to leave the salt water for their spawning grounds.

Chinook (King) salmon can also be caught in rivers and streams, although they are not as common as their silver counterparts. Pink salmon are best left alone after they leave salt water because they begin to deteriorate drastically once they enter the fresh water. Chum (dog) salmon are the worst possible salmon to catch in fresh water for the same reason. They are called dog salmon because they are traditionally fed to the dogs by Natives, which should give you an indication of their suitability for your dinner table.

The fifth type of salmon is probably the most prized as well as the most elusive. Sockeye (reds) aren’t generally caught by the usual sports methods because they feed differently from other salmon.

Nonetheless, you’ll be able to have success gear fishing for salmon if you know which rivers and streams to go visit and what type of salmon to go for.