Chum salmon are scientifically know as Oncorhynchus keta. They are a species that resides in the Pacific salmon, and is commonly tagged by fishermen that frequent river systems as dog salmon, dogs, dogfish or Keta salmon, and can be sold commercially as Silverbrite salmon.

These salmon are the most widely distributed of the Pacific species, ranging from the San Francisco area of California to Alaska in the west and from Korea and Japan to the seas of Russia in the east. The chum are more concentrated in the northern parts of their range, and commercial fisheries in Alaska and Russia take more chum than any other fish. Their meat is primarily smoked, and they tend to have less oil than other species.

Below you can see some differences between each sex of Chum Salmon:

While chum are similar to other Pacific salmon in their breeding habits, and they are by far the most wide-ranging when it comes to ocean travel, they do not travel the same distances as the other species in their runs. In fact, chum are most similar to the pink salmon, as they are most likely to spawn in rivers and streams close to the ocean or in intertidal zones.

There are exceptions, however, as the chum which breed in the Yukon River will travel up to 2,000 miles when spawning. They are an anadromous fish, and once they return to fresh water and breed they die. They have been noted as the least athletic of the species, unable to overcome obstacles that are in the way of their trip upstream.

This has meant that the damming of most rivers in their natural range has considerably decreased the stock. Interestingly, chum fry are hasty to leave their freshwater birthplace and head to the ocean within months after hatching. Other species will linger for around a year before heading out to the ocean. Finally, chum are the last of the salmon species to spawn, with their runs occurring throughout the winter months.

In appearance, chum are silver and blue-green in the ocean. When they undergo the physical changes that mark maturity, they are a yellowy color and will have remarkable strips on their sides and backs. Like other salmon, they will undergo a change in their jaw structure, with protruding teeth and curved upper and lower jaws. Chum usually grow to about 25 inches long, weighing around ten pounds.

Historically, chum salmon have not been sought after much by anglers. Their flesh is white and this combined with a lower oil content means that they are not as tasty to eat as their cousins. In fact, even native groups rejected chum most of the time as a food source, catching them to provide food for their dogs (thus one of the alternate names for this fish, the dog salmon.

They are also known by their scientific classification of Keta). However, chum are now growing in popularity with anglers, although more as a “training” fish than anything else. They are not as prone to fight as other species, but their large schools mean that they are readily available to test technique upon. Bait used for chum depends on how deep or shallow they are swimming; plankton feeders, lures, and flies will get bites in shallow water, while deeper water will require spinners, buzzers, and spoons.

Below are examples of a Chum lower Jaw and Tail. 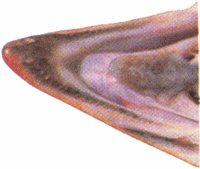 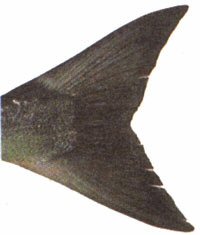 If you would like to learn more about each species such as Coho Salmon, click on the hypertext or go to the top of the page to find out more about the species you’re interested in.