Coho salmon’s scientific name is Oncorhynchus kisutch and originates from the Russian term kisutch. They are a migratory species of fish like their Pacific Ocean cousins of the same salmon family. Anglers have a couple slang terms for Coho such as silver salmon, silvers (not to be confused with Chum) or chromers.

Like other Pacific salmon species, coho salmon hatch in fresh water, migrate to the ocean as mentioned above, and at some point come to maturity and return to the streams where they were born to spawn and die. Coho usually mature around the ages of three to seven.

They are the least noticeable of the species in terms of physical change when they enter the spawning stage; their ocean silver is dulled somewhat to a pale red. They also gain the curved jaw and the upper teeth common to breeding male Pacific salmon.

Below are examples of each sex of Coho salmon.

Cohos are a very adaptable salmon species; within their range they can be found in all types of freshwater, from lakes to streams and rivers. Their range extends from northern California to the Aleutian Islands in Alaska in the east Pacific, and from Hokkaido in Japan to Siberia in Russia. Their adaptability has meant their successful introduction to many lakes and systems within the United States, including Lake Erie. Not all introductions have been positive, however, as rising coho stocks have depleted those of native fish.

Coho are one of the most commercially sought after of all the Pacific salmon species, making up the largest proportion of the catch in Alaska by both number and weight. The majority of these fish are taken by trollers, although gill and seine nets also catch a great many.

Coho salmon are one of the most popular fish species among North American anglers. Their size is in part responsible; coho average 38 inches in length and 11 pounds in weight, although many larger specimens have been landed. Some of the largest have been 31 pounds and 114 inches. The second reason that the coho is so prized is that it is known for its fight.

Coho are naturally inclined to take a wide range of lure, including flies, spinners, and jigs. In fact, the bigger (or more mature) a coho is, the more likely it is to bite on this type of bait. Once hooked, cohos give anglers a real run for their money, jumping, spinning, and diving in order to shake loose. With a coho of real size, this can be an incredible battle and story. Finally, coho salmon are known as a very tasty species.

Taken together, it is no wonder that coho are so popular among sport and commercial fishers alike, and that there is a desire to see the population increase both in its natural and introduced habitats.

The best way to get a good, accurate story while fishing for coho is to use lighter tackle. You’ll feel the fight a lot more, although it may increase the chances of the fish getting away, especially if it happens to be one of the 36-pound monsters that have been known to exist.

Still, you can take comfort in the fact that most coho salmon only grow to a third of this weight; even though they may be smaller, the fight they put up will still be worth the experience.

Here you can see the lower jaw and tail of the Coho Salmon. 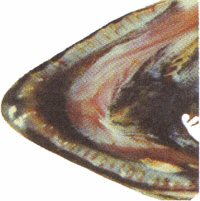 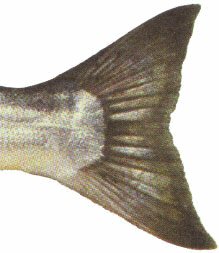 Spawning Timing for the Salmon River:

If you would like to learn more about each species such as Pink Salmon, click on the hypertext or go to the top of the page to find out more about the species you’re interested in.