Okay so you’re probably wondering what spey fishing for salmon is all about and where the name came from right? Well the second part is easy and the first a little more complicated, but we’ll try and clear that up for you. The word spey comes from one of biggest rivers in Scotland, where the Scots would use these large fly rods in order to cast their fly an incredibly longer distance than a contemporary fly fishing rod would allow. 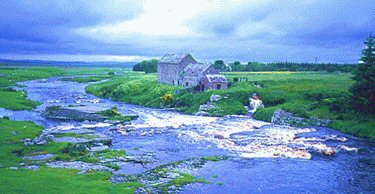 Because of it’s mass – much like it’s sisters; the Tay river and Tweed river – anglers needed to have a fishing pole that would whip the fly out a considerable distance to get to Atlantic salmon, which was their main target fishery, so often they used two hands and all of their strength as these old sticks were ugly and heavy, but effective…but
tiresome on an all day excursion.

Okay that’s the first part and it wasn’t too bad right? Good, cuz it get’s a little more difficult from here on in and you know how fishing can be where explaining and doing are two different things! Don’t worry though because with the amount of Steelhead and Coho you can catch and how popular they are becoming, you’ll get the hang of it in no time and there really is nothing like it. Let’s have a look at some of the dynamics of spey fishing and it’s anatomy.

Many successful speycaster’s will credit their heavy nets to the fact that they can easily get to holes or tail outs that many other anglers can’t get to. They say this because spey casting techniques are such that you can have almost no back cast in order to absolutely launch a fly across the river to the perfect tail of a rapid where there are going to be some fish holding.

Another benefit was mentioned previously and that’s the distance or water that you are able to cover and if water is under allot of fishing pressure (guys are walking through water, plunking a bunch of weights and gear all day) fish get spooked and move away from that spot, which in turn opens up tons’ of doors for the spey fisherman. 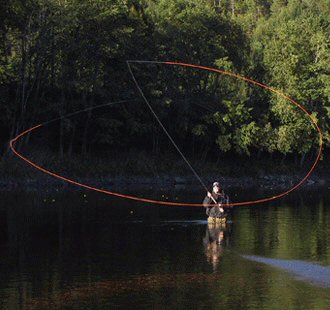 One of the most widely used techniques of spey cast rods is called a roll cast where the line is rolled essentially from side to side in big loops before the main cast out into the river.

This method is the main reason anglers are able to avoid heavy brush, walls of rock or dense snags behind them, as the spey line is constantly beside or in-front of them.

Another advantage of spey fishing is line control and versatility. Spey line and backing is made with materials that cut through wind and still air like no other and this combined with a super long fishing rod that is going to provide you with massive directional control, with a little reading you’ll pick it up in no time and if you’re wife ever criticizes you for never dancing, at least you can tell her you spey cast – with its swinging movements and articulate steps, it’s the closest thing to dancing a guy should ever admit to!

Let’s have a quick peek at technology and speyrods. Back in the old country in the old times these rods were often made from wood like Ash, Lancewood and shaved Greenheart making for elegant and beautiful hand made fishing poles.

In today’s standards though, these rods are more for fly rod collectors and traditionalists then they are for active Steelheaders, as they are very basic in design, but extremely hard to make since they are hand crafted. The guides on these rods were often made of brass rings that weren’t adhered to the rod like they are today and made for sloppy line retrieval while fighting fish.

So as you can imagine because of these materials and lack of technology, the rods were extremely heavy and cumbersome on a long day on the river!

Today these rods have come a long way and with materials like graphite and rods that break down into 5 sections, they have become extremely versatile and easy to use for even a skinny runt like me! A simple light movement of your hands twelve inches is amplified by 15 to 20 feet of spey rod movement! This used to be heavy handling but with today’s materials, is a cinch. Spey line and spey fishing reels have come just as
far with light materials that are durable and more effective and efficient.

With the likes of big names such as St.Croix, Sage and G.Loomis there are many rods to choose from when going spey fishing for salmon, and we have some great ones that you can buy or spey rod building kits that you can check out too! Have fun with it and keep you lines snug!