For decades many anglers were trolling plugs during salmon fishing derby???s and trout comps. More anglers today have been exposed to its potent success in producing big fish time after time.?? Some of this success is actually attributed to the size of the plug!?? Because salmon feed on bait primarily proportionate to their own size, bigger plugs yield bigger fish more times than none. 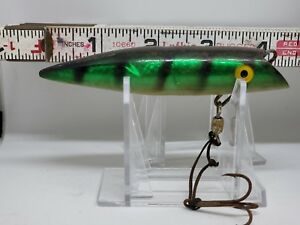 Possibly the most important reason why salmon prefer the biggest bait possible is that they don???t like to use up energy if they don???t need to.?? In other words, it???s like trying to crack a bunch of sunflower seeds in order to have a meal ??? it just doesn???t work.?? On the other hand, too large of a plug can prevent you from catching any fish at all if the salmon can???t get their mouths around it easy enough.

Just like fishing evolves, so do the plugs that have grown with the sport.?? With technology advances, there have been plugs that have proven to be extremely strong under tension and last constant self induced action and fatigue, due to the materials that are used.

Click Here to visit our tackle page including plugs for trolling

What the heck is a plug and how does it work?

A plug is a lure commonly resembling a bullet, that has been cut on the blunt end at a 45 degree angle.?? Plugs have a fast action effectively imitating the image and movements of a wounded minnow in the water.?? These lures will dart at all angles in the water and depend on the current of the water sweeping across its surface to provide it with the proper action or look.?? A built in swivel chain allows the lure to be attached to the body of the plug allowing it to move freely and separately from the line, which in turn decreases the possibility of tangling.

Plugs cover the most water when there are dragged or trolled in a random S pattern.?? Zig zagging changes the depth, speed and direction of the plug which in turn simulates the random movement of a wounded herring or baitfish.?? It???s important that while zig zagging, you don???t just keep going slow.?? Although you are changing the speed by not traveling in a straight line, it???s important to constantly change the pattern of the plug and don???t become too complacent.

One of the methods of trolling plugs is called the surface or flatline technique.?? The plug is tied up directly to you main line usually with little to no weight ??? although sometimes a small half oz. weight can be used.

Once the plug has been tied on to your leader, it???s let out into the water usually anywhere from 80 up to 200 feet behind the boat, depending on the aggressiveness of the salmon.?? This type of trolling is super effective when salmon are feeding on bait balls that are close to the top of the oceans surface and can easily be seen by flocks of gulls or movement on the surface of the water ??? or ???good old??? gps.

In a medium to shallow depth troll of a plug, a sinker is needed to get your lure down to an effective depth.?? A keel sinker is common in these situations and is best placed anywhere from 4-6 feet from the lure.

Weight of your keel should be anywhere from 1-8 oz. with a mainline of 12-30 lb test, but this will depend on the depth that you believe the fish to be at and can vary.

I recommend you attaching a swivel to your weight, that has the swivel chain end attached to the plug to avoid twisting of your mainline creating fatigue and lost gear ??? maybe even a lost fish!

When trolling a plug for salmon in medium depths, the distance behind the boat is usually the same as surface trolling and should be from 80-200 feet behind your boat.

Well not all of us have access to expensive downriggers, but there is a way to get your plug down deep enough to get you into some salmon that are hanging out on the lower levels of the ocean.?? Any kind of diver is an effective and cheap way to get a plug down and a common sinker like the Deep Six is a great way to achieve this.

The diver should be attached about 5 feet from the plug on a 20-30 pound test line.?? Make sure that you have put the diver in it???s actual ???dive??? mode and it will do the work for you!

I suggest that you place the diver in the water once setup, to make sure it???s going to do it???s job properly.?? Once you have determined that the diver is going to get your plug to the bottom, move forward slowly until you have your 100 feet out (or however much line you think is good) and begin trolling!

Most divers have a release that will free the line from it or trip a switch of some sort allowing the diver to move without resistance from the fish.

Some quick tips about plugs:

-keep them out of the sun and away from constant contact with other items as both will change the durability and quality of the finish or design.

-always check the swivel of your plug to assure it???s in good working condition and attached to the body of the plug securely.

-check for sharpness and corrosion of the hook.?? You can do this by running the point of the hook along your thumbnail ??? if it digs in or scrapes easily and doesn???t just slide off you don???t need to sharpen it.?? Corroded hooks should be replaced or cleaned to see if they are useable.

Ever wonder what the big deal about color or design is all about??? Well I always do and although some of it doesn???t always work in particular conditions, most of the time science is the main reason for a plug or lure to work.

Here are a couple of tips for why colors work the way they do:

–Metallic colors work because they simulate the colors of baitfish.?? Silver, gold or reflective metallics will attract salmon much like wounded baitfish.

–Bright or Glowing colors are used for visibility in deep waters or low vis water.?? While trolling plugs down deep, the glow of the plug contains phosphor pigments that give off a certain light in these low visibility conditions.?? Note: keep these lures out of the light if possible!

–Sparkles on plugs are an effective way to attract a salmons attention and are incorporated into the design of the plug to provide a territorial or instinctive attack on the lure rather than a ???mmm yummy??? type reaction.

A few more effective tips that I can provide you with for trolling salmon plugs have to do with the where and when ??? two critical aspects of trolling plugs for salmon but the most valuable of all is experience, the best thing on earth when it comes to being productive on the ocean but equipment makes things easier and more enjoyable.

Equipment makes things easier and more enjoyable and something like a good depth finder or fish finder will help you locate more fish and will tell you to what depth you should sink a plug.?? It???s also a good idea to keep your plug just above where the fish are at so that they???re not staring down a shiny monofilament line as it glistens in the sunlight, you don’t want to spook them away from your gem!

Tide change is one of the most important times to be out there fishing as it brings food sources out and in to sea.?? The best time for this is dawn and dusk.?? If you don???t manage to catch the tide, look for gulls as they are a dead give away of baitballs and where there???s baitballs there???s big salmon!

Have fun trolling plugs and if you have any comments or questions “drop us a line!”