Enter technology! Sensitive graphite and composite rods come into play about 20 years later and with a handful of guides and avid anglers located in Washington’s southwest region and some of British Columbia???s finest fishermen, ??they transform the technique into one that could be fished with light tackle including fly rods. 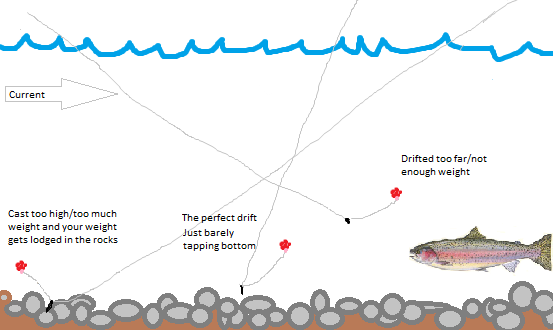 Light spinning rods, spooled with 8 to 10 pound mainline, long leaders in 6 to 8 pound test, and tiny baits were soon the weapon of choice on rivers like Cowlitz and Lewis. As with any lighter tackle, lighter weight is used. Lighter pencil lead meant anglers didn’t need to use the amounts they used to, to hold the bait in a holding zone along the rivers bottom, creating a much more natural presentation.

Anyone knows that the more tackle you have the less you feel a fish. Try trolling a ford fender with a down rigger behind a boat and let me know when you have a 1 pound fish on! Tuff! But put a little tungsten steel on some light spinning tackle with a stealthy graphite rod and hook into a Chrome bullet and you can be sure you’ll have a heart that’s gonna’ pop out of your shirt.

Side drifting is the common term used for people in jetboats and drifting boats that float down the many river systems often using ores with kicker motor backups. ??The term is used commonly in the Pacific Northwestern region where anglers are in search of Steelhead and other Salmon. Its popularity is growing and because of the mobility to different pools it’s very productive and makes covering lots of water in a day much easier and less work.

Fishing lines are kept at a 45 degree angle upstream from the boat the entire duration of the drift. If lines are parallel to the boat it becomes nearly impossible to detect a strike, not to mention you’ll lose tons of gear in rocks and dead fallen logs. The most important point about drift though, with the way Steelhead fisheries is going, is to make sure you DO keep your line upstream so if you have in fact hooked a fish that you intend on releasing, it hasn’t swallowed the hook, which can cause severe damage and sometimes death.

Here’s what you’re going to need to get started:

Use a light spinning rod that will suit your reel and the water that you are fishing. If you’re fishing a river that has strong currents than you will want a heavier test like 10 pound. If you intend to drift in all sorts of conditions buy a middle of the road test like say 8 pound test so you can do it all, but remember that this will effect how you fight the fish and how you gear up the rest of your rig!

If you buy pencil lead, we recommend you buy a “coil” of it, but hollow tubes of lead are good too!. Buying coils of lead will be a bit cheaper for you as you have to do the cutting, although cutting is a good thing! If you are able to pre-cut your lead before you head out you will be quickly prepared for the elements that get thrown at you, as they get thrown at you.

Start with about 3 inches of lead and work your way down by 1/4″ until you get to 1″ lead pieces. You want to find that balance that’s going to keep your bait just above the bed so it doesn’t get caught up and you’re not constantly loosing bait or gear.

You want high end Steelhead spinning reels? Try the Calcutta CT200 or TE series made by Shimano! It’s more expensive but will probably be the only Steelhead reel you ever buy! It’s commonly used for Coho and Steelies by experienced anglers and it’s stood the test of time and “Chromers.” If you just started then you may want to look at an entry level reel until you get the hang of things. A Quantum AC500 or Daiwa Viento series is an amazing reel for beginners for price point, accuracy and usability.

These are bait casting reels and are not typical spinning reels – otherwise know as coffee-grinders – and are a better buy although they take a little getting used to. If you havn’t moved on to a baitcasting reel yet and still like the old open faced spool spinners, try something like a Shimano Symetre reel. Check out these gosalmonfishing.com recommendations;

Use high visibility monofilament backing! Side drifting with multiple rods allows anglers and guides to see what???s going on with the lines. Until you get more experienced this is the way you want to go so you???re not casting on top of your friends, and it also allows the person operating the boat to see how the baits are drifting so they can maneuver the boat properly.

Leader length and test is adjusted to match water clarity, with longer lengths and lighter leaders reserved for the clearest of water.?? Mainline test rating should be one size above the test of the leader and when large wild steelhead are present in a river system heavier line, like 12 lb test, is suggested.?? In addition, when wild fish outnumber hatchery fish the use of a single size 2 hook rigged with a puff ball, as described in side drifting rigs, can be substituted to reduce hooking mortality.

Drift fishing gets its name from the fact that you are just drifting along in your boat; there is no motor, no need to get to one point or another, just you, the waves, and hopefully a school of salmon below you somewhere. Drift fishing will often mean both mooching and casting, depending on where you think the fish are. This means that you should have both an open face casting reel and line set up in case you spot salmon on the rise for a school of herring away from the boat as well as the usual gear and products for depth fishing.

The bait used in drift fishing is designed to give the impression of a wounded baitfish. This bait tempts salmon on several levels. Visually, flashes of light will catch the attention of the big carnivorous fish and lead them to the area. Of even more significance are the sound vibrations set off by the bait, which give them their colloquial term ???bottom bouncers???. These vibrations attract fish from all over the area, who want to get a look at what???s in distress.

Both the movement and the sound created by the bait in drift fishing are designed to trigger a predatory response in salmon. All predators, both terrestrial and marine, are drawn to the easy meal that a wounded prey species represents. An animal wounded can???t get away as easily, and will trigger a ???eat NOW??? instinct in the brain of the predator. Easy meals are difficult to come by in any wild setting, and the fish want to snap it up before someone else does.

Because of the still water nature of drift fishing on the ocean, it is important that the line used is lighter and won???t be spotted by an approaching salmon, especially the leader portions. Good leader will be lighter than twenty pound test.

Finally, the rods used in drift fishing are different from the ones that you will have success on while mooching. Mooching rods have soft tips, which allow a watching fisherman to see when the salmon takes the bait. Drift fishing is about the instant grab and then the fight, so a rod with a semi stiff tip is required to set the hook in the mouth of the salmon. If the rod is too stiff, however, you run the risk of tearing the hook right out of the salmon and losing the fish altogether because they don???t have as much play.

In drift fishing, you want to be moving the rod up and down, causing the vibrations which cause the salmon to go nuts. This up and down motion can be tiring on the wrists, so it is important that the rod has a good foot or so of butt length which will support your forearms. This length will also allow you some extra leverage against your stomach to help when reeling a fish in. In bigger swells, it’s common for anglers to actually use the swell as the up and down motion rather than the arms.

Drift fishing and mooching are peaceful, stationary ways to catch salmon out on the ocean, and both require quite a bit of patience and set up skill. Trolling, on the other hand, will allow you to take in a lot of scenery and try out a few different spots.